Self Tanner Dos and Don’ts 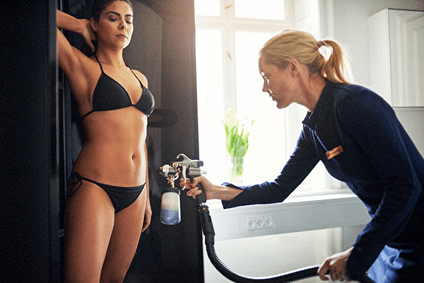 What is a self-tanner, and what are some Dos and Don’ts for their use?

A self-tanner is a cream or lotion containing chemicals that react with the skin’s surface to produce an artificial tan. They’ve been around for a long time, and no doubt most of us have tried one at least once. The FDA approved the use of the main ingredient, Dihydroxyacetone (or DHA), in the 1970s for use in self-tanners. Before this, people utilized the tannins found in tea leaves to stain the skin a darker color. Ugh!

Formulations have improved quite a bit since then. Unlike the products that made one look like a carrot, it’s now possible to have a fairly natural-looking tan (even tanning gradually) with the products on the market today.

There is the obvious reason for using a self-tanner: you avoid excess sun exposure which is known to damage the skin. One also gets instant gratification; instead of tanning for hours, an instant tan can be had with very little effort. For someone looking to look sunkissed for a special event, it is a quick and easy way to achieve the look without the risk of sunburn. Some self tanners also contain erythrulose, a carbohydrate that helps to produce a more natural-looking tan.

So what are the downsides to using a self-tanner? For one, some individuals may be sensitive to the main ingredient DHA. It has been shown to cause contact dermatitis in some individuals. More importantly, some studies have shown that sun exposure within 24 hours of applying DHA can cause free radical formation, thereby damaging skin cells. Therefore, it’s important for consumers to know that when using self-tanners containing this ingredient, they should avoid sun exposure for a period of time.

Many individuals also use tanning booths where the self-tanner is sprayed onto the skin. This increases the likelihood of inhaling DHA and other ingredients, which can have negative effects over time. Long-term effects of inhaling these ingredients is unknown. The dyes used in these products could also cause allergic reactions. In addition, many of the other ingredients found in self-tanners like fragrances and preservatives may also cause reactions in some individuals.

So can one find a self-tanner without DHA? Alternative ingredients are being developed for self-tanners that do not produce the same type chemical reaction. For example, the amino acid Tyrosine has been shown to possibly enhance melanin formation in the skin. Other ingredients like this include Vitamin D metabolite, retinoids, and Forskolin (derived from the Indian Coleus root). It may be some time before they are commonly available.

Another idea that involves zero commitment is to use cosmetics to create a temporary glow. Many cream and powder bronzers are available on the market that can be used on the face and body to provide some color. Ingredients used in cosmetics in the U.S. are regulated by the FDA. Even so, a patch test is always a good idea if your skin is particularly sensitive. Powders tend to have fewer ingredients than creams and lotions.

Regardless of which product you use, it’s always a good idea to obtain an ingredient list and to perform a patch test before using it all over. Read reviews and exercise caution when going out into the sun. With a little experimentation, you will be able to find the right self-tanner to give you the sunkissed glow you’re seeking.